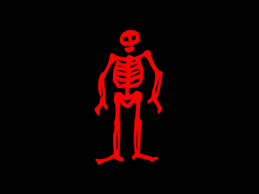 The mere mention of “the word PIRATES” froze the blood in the veins of any person who had made sea travel their livelihood during the Modern Age.

Travelers, merchants and sailors knew that, no matter how well equipped and defended their ships were, an attack by the experienced pirates was likely to end horribly for them.

And when they were on the high seas, it was the vision of a flag that indicated to them, with the certainty of a jug of cold water, that they were about to meet face to face with one of their worst nightmares.

Currently, we are accustomed to thinking of the pirate flag as the one with a black background in which a skull and two cross-shaped tibias appear, which were sometimes replaced by two swords.

However, this image so popularized by film and television does not fully correspond to reality because, although there were banners with this design, a large number of different versions were also used.

For example, the Welsh pirate Bartholomew Roberts used, at the beginning of the 18th century, a flag on which death appeared (represented by a skeleton) and he holding an hourglass, which generally meant that the lifetime of his enemies was I was running out. 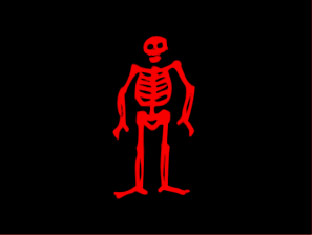 He also used another one where he appeared wielding, menacingly, a sword and resting on two skulls. Also, the pirate Edward Low used a flag in which a red skeleton appeared on a black background and the famous pirate Edward Teach, the famous “Blackbeard”, used a flag in which a skeleton appeared in the shape of a demon that he held, in one hand, an hourglass and, in the other, a spear with which he prepared to go through a red bleeding heart.

Therefore, there were many different pirate flags and, in fact, some of the most famous pirates in history used a particular design that served to identify them.

In any case, the use of skulls on a red or black background was always very common in their designs, so that it is their image that has been fixed in the collective imagination as the vision that identifies pirates.

A simple black flag already identified the ship that carried it; Generally, a red flag would not only identify the ship as a pirate, but also indicate that the ship would not have the mercy or possibility of surrender.

The pirate ships were not constantly carrying their pirate flag, for the simple reason that, at such a clear signal that a pirate ship was approaching, its possible prey would try to flee or get ready for the attack, something that did not suit at all some attackers who wished to seize a ship and merchandise that was in the best possible condition.

The pirate ships could raise a false flag or sail without it until the ship with which they intended to be was close enough to them so that he could not flee or so that they could easily attack him before his adversaries could arm themselves or have the possibility of organizing to present a serious resistance.

The appearance of the pirate flag used to communicate a very clear and very direct message: the attacked ship had to surrender immediately and without conditions.

Otherwise, he would be taken to the assault and the people who traveled there would suffer a horrible fate.

Once the fight began, no surrender of any kind would be accepted.

Thus, if we join the horrible vision of the pirate flag with all the rumors and legends that any sailor would have heard about pirate cruelty, many of the ships attacked surrendered without conditions, with the aim of avoiding the crew as much suffering as possible. .

The passage of time and the progressive disappearance of piracy did not mean that its flag ceased to be used.

On the contrary, the military forces began to use the black flag with a skull and bones as a badge or image of their ferocity.

A curiosity about the use of the pirate flag today 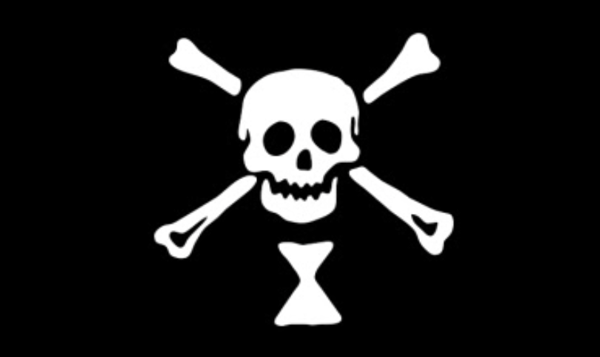 It is especially curious that British submarines have acquired, since the beginning of the 20th century, the tradition of flying the typical pirate flag when they arrive in port after having succeeded in the mission entrusted to them.