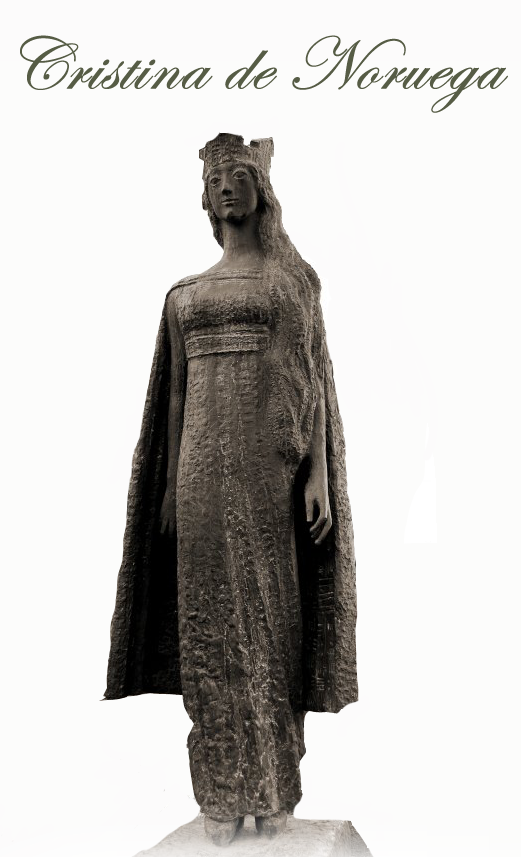 … That he came to marry Castile from the mysterious countries of the North: that Alfonso X “the Wise”, being unhappy because his wife, Violante de Aragón, daughter of Jaime I the Conqueror, did not give him heirs to his throne after years of marriage, he decided to repudiate her and find a new wife who could give him descendants.

With this in mind, he sent an embassy to the Norwegian court to ask for the hand of the only daughter of Haakon IV the Elder, Princess Cristina, famous throughout Europe for her beauty and virtue, seeking fertility that was believed at the time that the Scandinavian women possessed.

King Haakon, flattered by the alliance that King Alfonso offered him, ratified the marriage and sent his daughter to the Castilian court to celebrate the wedding, but when he arrived in Castile, the news that the Violating Queen was pregnant, so the reason why Alfonso wanted to disown her disappeared. The sovereign did not want to lose the Norwegian alliance and offered Princess Cristina the hand of one of her four brothers, choosing she who pleased her the most.

Cristina chose the infant Don Felipe, who was archbishop of Seville and, as had been agreed, married, going to Seville to live after the betrothal but, secretly in love with the king the Norwegian princess and yearning for her homeland, died of alleged melancholy four years later. She was buried in the cloister of the collegiate church of San Cosme and San Damián de Covarrubias.

For a long time, lost its wake on the night of time, it was believed that the princess was only an invention from Castilian romance, but somewhere between this legend and historical reality lies the truth of this character, whose life is found intrinsically related to one of the most important events in universal history and medieval Spain.

Why did the Castilian king, so far from Norway, need to agree on a marriage alliance with Haakon IV?

Emperor Conrad IV had died in 1254, leaving only a young child, Conradino.

In the context of the so-called Grand Interregno of the Empire, King Alfonso X of Castile was offered the German crown as a member of a collateral branch of the imperial dynasty of the Staufen, being the son of Beatrice of Swabia and grandson of the King of the Romans Philip of Swabia, by the Ghibelline Republic of Pisa, which Alfonso accepted without hesitation in March 1256. But he was not the only candidate and his most powerful rival was Ricardo de Cornwall, brother of Henry III of England and brother-in-law of the former Emperor Frederick II.

Alfonso X proclaimed himself king of the Romans and elected emperor rising as a champion of the Ghibellines, while his rival did the same as leader of the Guelphs. The Castilian king needed international support to gain total, unique and effective control of the Empire, which could happen to get the support of the most powerful Baltic power of the time, that is, by an alliance with King Haakon IV of Norway.

Thus, within this political context, in 1256 the Princess Cristina’s commitment to one of the sovereign’s brothers of her choice would be sealed, not with the king himself as the legend mistakenly says, as the marriage of Alfonso X and Violante Aragon had already had, at the time of these negotiations, at least three fruits (Berenguela, born in 1253; Beatriz, in 1254; the heir, Fernando, in 1255, and perhaps they would also have Leonor, whose date of birth is situated around 1256).

With this agreement, both got important support that would always depend on the election of King Alfonso as emperor, which, as it never finally occurred, caused the relations between both kingdoms to be severed for several centuries after the final election as emperor of Rodolfo I of Habsburg.

Little did Princess Cristina have to say, like the rest of the princesses of her time, before a political pact signed and sealed, so Cristina leaves for Castilla in 1257 with a luxurious dowry and accompanied by more than one hundred nobles and maidens . During her trip, the princess passes through France and then through Aragon, where she meets King Jaime I the Conqueror.

King Jaime, then already a widower of Queen Violante of Hungary, seems to have fallen in love with the young princess of Norway and subsequently sent a letter to his son-in-law Alfonso and the same princess asking to be granted his hand instead of one of the brothers of the Castilian king, but his offer was not accepted. Cristina finally arrives in Palencia, where she was received by Alfonso X himself, with whom he goes to Valladolid to choose, among all the king’s brothers, the one he likes best.

At the time of Princess Cristina’s arrival in Valladolid, Alfonso has four unmarried brothers among whom the princess (always with the acquiescence of the advice that her father has made to accompany her to Castile) can choose.

These are the infants Federico, the eldest of them all, Enrique, who had come to rebel against his brother, so his choice was inadvisable, Sancho, elected archbishop of Toledo, and Felipe, who had been the elect archbishop of Seville and abbot of Covarrubias, the youngest of all. It seems that Alfonso X felt a predilection for his younger brother, Felipe and, whether for this reason or for any other, he was finally chosen by Princess Cristina and her council. The marriage was finally celebrated in Valladolid on March 31, 1258.

The marriage moved to the Biorraguel palace in Seville. Little else is known about her; his life must have been lonely, because there are no references to visiting the court regularly, the language barrier being very likely a problem at the beginning of his arrival.

Her new husband spent most of his time hunting or in the aforementioned court of Alfonso X, who spent long periods in the city reconquered by the Holy King. In addition, there is news that Cristina made her husband promise that he would build a chapel or church in honor of St. Olav, the evangelizing king of Norway, but could not see this wish fulfilled in life. However, in 2011, the Cristina de Norway Foundation opened a chapel dedicated to Saint Olav in Covarrubias, fulfilling the wish the princess had expressed almost 800 years earlier.

But his life was extinguished almost as quickly as the agreement between his father and his brother-in-law; Princess Cristina died a few years later without leaving offspring of her husband Felipe, without us knowing the exact date of her death or where it happened, although presumably it was in Seville, since that was the usual place of her residence and the date would always be earlier to 1269, when her husband already appears married in second nuptials.

Her body was buried in the collegiate church of San Cosme and San Damián de Covarrubias; experts point as possible cause of his death that of a meningitis by a recipe that appeared in his grave during the exhumation of his body in 1952, but nothing is known beyond the fact that it was not, as the legend insisted on spreading , a death by melancholy by the disappointment that supposed not to marry the king.

Her memory was soon lost and only her presence remained in the romances from which she would enter the legend, which speaks of a fairytale princess who died of melancholy waiting for a king who was never destined for her.

A princess of romantic legend that one day, in her time, in her space and in her dreams, was real and whose memory is still alive, although asleep, in a statue and a sepulcher forgotten in the center of the fields of Castile, perhaps dreaming the Norway that more than seven hundred years ago left behind.