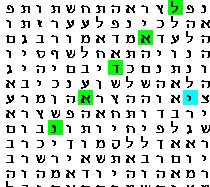 What is code B?

This is how Code B works
The mathematician of Israeli origin Eliyahu Rips, in the mid-1990s, aided by a computer program, made public a bewildering discovery that was hidden behind the sacred text: he found in it coded words that offered messages with a much lower level of probability than those that could be found by chance.

That is, he managed to unravel the supposed secret code that the Bible hides and that has been sought since ancient times.

In 1997, journalist Michel Drosnin wrote the bestseller “The Secret Code of the Bible” with which he made known worldwide the key messages that the future seemed to hold for humanity.

For both Rips and Drosnin, the text, the Old Testament, with more than three thousand years old, contained messages of events that had already been fulfilled, that were being fulfilled and that would come to happen. Few were flattering.

The code of the Bible has been studied since ancient times.

Many sages, such as Sir Isaac Newton theorist of universal gravitation, among many other contributions to the world of Science, devoted part of his work to the search for the code.

For Newton, the Bible was “a cryptogram sent by the Almighty,” but the scientist, born in 1642, did not have the precise tools to extract that hidden “truth.”

How to decode the secret content of the Bible

It was necessary to have a powerful instrument capable of performing calculations quickly and systematically. Only today, thanks to computer science, can this task be performed. And, precisely, that was what the mathematical team Rips did.

He created a computer program that searched for words about the biblical text continuously and skipping a constant number of letters.

Those who had the opportunity to read in this same magazine the article “Secret Codes”, will remember that Julio Cesar already codified his messages using the method of “substitution”, that is, he replaced each letter of his message with the next three of the alphabet , changing those letters deciphered what the emperor secretly sent to his military.

In the case of the Bible, what Rips discovered was that by jumping a constant number of characters, words were found that gave a new meaning to the text.

What Rips’ computer program does is place, one after another, each Hebrew sign of the original of the Bible, according to tradition, the way it was delivered to Moses and, as if it were a wordsearch, they leave forming words that have a new intelligible sense.

The code and the way it was found was published in an article by the prestigious magazine “Stadistical Sciencie” in 1994.

How could it be otherwise, it has been subjected to multiple tests to know if it was real or not, whether it was true or not.

One of these tests was carried out, independently of the author, performing the random search of the names of thirty-two wise men who lived after the times that are narrated in the Bible, based on the same computer program. The results were resounding.

The search included the name and date of birth and death of those thirty-two wise men. Interestingly, all that information appeared encoded in the sacred text.

Harold Gans, a member of the National Security Agency of the United States, took the experiment further, not believing in the likelihood of the discovery.

He looked for the names of the cities where the wise men chosen at random were born, the statistical probability that they were encoded on the same pages was one in ten million.

After doing the search, Gans located the name of the cities in each of the pages where the names of the wise men were. Experiments have also been carried out with the computer program, using other texts, such as the novel “War and Peace” by Tolstoy.

In none of them the coincidences were as eloquent and repetitive as in the biblical text.

Some predictions fulfilled and others not

For this reason, seeing that the code seemed true, both Bill Clinton, Arafat and Rabin, were interested at the time so Drosnin tried to transfer them personally.

With the logical difficulties, he reached them or even trusted men of political leaders. Searching the encoded biblical text, Drosnin found a message that spooked him. Next to the name Rabin, he found the phrase “murderer who will kill.”

The journalist came to deliver a letter warning of this prophecy to a friend of Rabin, but as we know it did not help.

The author of the bestseller, Drosdin, has not stopped informing the leaders of the findings.

The day before 9/11, the journalist sent a letter to George W. Bush indicating that the Bible code indicated that the World was facing a world war that would begin with a major attack in the Middle East.

Textually, it said: “The words” Bush “” Arafat “and” Sharon “are coded together with the expression” end of days. “

Also, the code seemed to speak the language of our present, unthinkable three thousand years ago, as the words “atomic holocaust” and “world war” appear coded.

In fact, the Torah itself contains, without coding, several parts where “the end of days” is narrated. One of the prophecies that was not fulfilled, luckily, was the one enunciated by Drosdin, who when he saw it, according to computer predictions through the Bible in 5766, according to the Hebrew calendar, which would correspond to the western year 2006 , according to an interpretation of the code, in that year a war happened that would affect countries that profess the three most important religions in the world: Jews, Muslims and Christians.

This war, according to the interpretations of the investigators, would begin with a great attack in Jerusalem. Years later we can verify that it was not so.

But, despite errors of calculation and interpretation, if it is true that after the words of the Bible there was an encrypted message, who is or was the author?

Following tradition, God gave the Bible to Moses on Mount Sinai one thousand two hundred years before Christ. Therefore, from that point of view, the code was already written from that moment, thus being God the encoder. Following the orders of the imagination, anything is possible.

Scholars of all these arguments relate it to collateral issues. Thus, following the discoverer of DNA, Francis Crick, it is more than likely that our DNA comes from another planet, that is, that the sequence that composes the beings that inhabit this world comes from outer space, since the DNA molecule is too complex to have evolved on our planet four million years ago.

The first sample of life comes from less than four million years ago. A search in the Bible code gave the following curious result for Drosnin: “DNA was brought in a vehicle.” For all of which, it seems right to think that life came to Earth from another place. The questions may continue to increase: from where and for what?

Teamwork to unravel the mystery of Code B

A group of Spanish researchers adapted the Eliyahu Rips team’s Bible code to Latin characters, that is, they carried out a computer program that included the possibility of searching the content of the five Torah books in Spanish.

The claim contained in the proposal of these researchers is to do something similar to what is done from the SETI program.

Program that analyzes any signal from outer space to Earth for analysis on the personal computers of those who want to collaborate altruistically in the investigation.

In this case, through what they have designated as “cryptorah project”, it is intended to extend the search to all those who want to collaborate to unravel the supposed secret code that the Holy Scriptures hide.

The Bible code. The code-b