Why was Attila called the scourge of god? ⚡

Attila, the king of the Huns, was known like “The Scourge of God”. This name is due to the Latin statement “Ego sum Attila flagellum Dei”, which means: “I am Attila, the scourge of God. And it was enunciated in 1387. That phrase can be read in the medallion with which we illustrate (in the image) this article. But Attila lived in the 5th century after Jesus Christ. 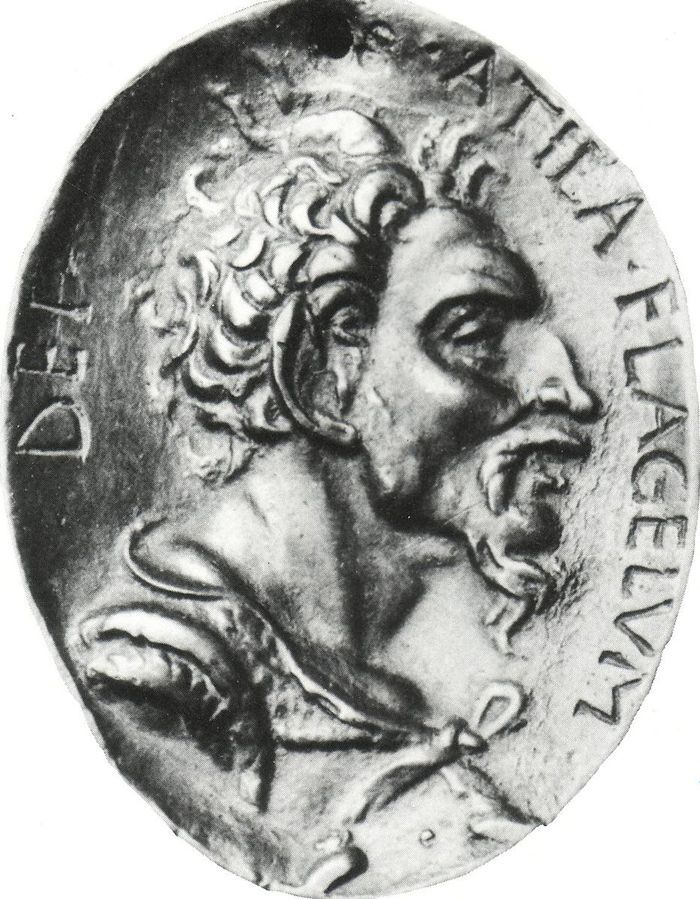 The reasons why it was called that were diverse and, as we can imagine, although they are varied, all with a common link: its barbaric fierceness.

It is clear that this is how it has come to our days. Many Roman writings, of which really were his scourge, reflect the legends of the events of Attila and his army. They could be called “the hordes of Satan,” or something like “a plague of monsters.”

And it is that Attila is recognized as the first major non-Christian threat to the Roman Empire since his conversion, and a really serious threat.

Let us remember that for the Romans, the barbarians, were those who did not speak Latin. And Attila, entered that particular group, like other rulers considered as Genseric, king of the Vandals and the Alans between the years 428 and 477 or, the also mythical Genghis Khan.

But: Who was Attila? And the Huns?

Attila was the king of the Huns, a non-Christian people who lived in “the Great Hungarian Plain” during the 5th century AD. C.
At its peak, his empire spread across Central Europe. Under Attila the Huns sacked and destroyed many Roman cities and where they passed they showed no mercy.

Interestingly, he passed away on their wedding night, which was not the first, since he practiced polygamy.

It still remains an enigma if his death was natural or if he was murdered, precisely by his new wife, Ildico. But that’s another story that we bring to our Actually Notes pages.

Article Name
Who was Attila?, "the scourge of god"
Description
Where Attila's horse passes, the grass does not grow again. Who was Attila? And the Huns? The reasons why it was called that were diverse.
Author
Lilian M Montesinos
Publisher Name
Actually Notes Magazine
Publisher Logo

History
Posted on 16 May, 20213 February, 2022
Contents1 Isabel and Fernando (the ‘infidel’): the Catholic Monarchs2 Four are the illegitimate children of Ferdinand II of Aragon3 Alfonso of Aragon4 Juana, Countess...