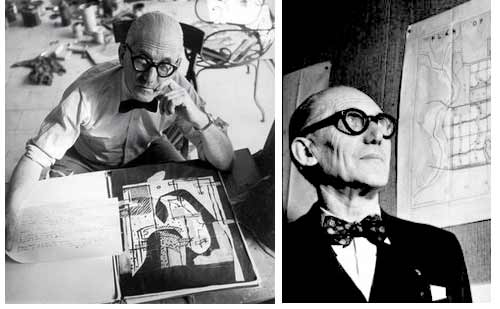 The idea was, in principle, simple. A city could be “compressed into an agglomeration of vertical extrusions in a limited location.” That was what had been done on Manhattan Island in the early 20th century.

And the idea had crossed the Atlantic to Europe. Charles Édouard Jeanneret, better known as Le Corbusier, the Raven, devised the Plan Voisin in 1925 to restructure Paris.

The idea of the architect Le Corbusier

For Le Corbusier the urban center of Paris was too congested.

It was small and old, it had become obsolete in the face of the intense road traffic that was taking place in the incipient twentieth century. 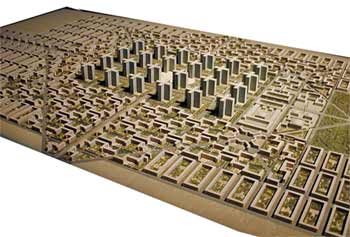 For the architect, the city had been anchored, it was a “medieval relic”.

Spaces needed to be rationalized.

The patrons of Le Corbusier

After receiving the rejection of financing to start the investigation by the car manufacturers Peugeot and Citroën, the patronage was found by Le Corbusier in another car manufacturer, Voisin. To carry out the plan it was necessary to cut off a good part of Paris known.

About forty hectares of land would be cleared, on the right bank of the Seine. Lug
ares that were “unsanitary and outdated.”

A huge highway would run through the area from East to West.

Buildings one hundred and eighty meters high, glazed and in the shape of a cross and green areas would replace the obsolete, the old of the city.

His idea also included leaving the monuments, somehow, isolated. The principle was not to destroy the past, obviously, but to rebuild it.

In the words of the architect: «The past is transformed into something that is no longer dangerous for life, but finds its true place within it«, or, «My great dream is to be able to see, once again, the Place de la Concorde empty, silent and lonely.

Perhaps Le Corbusier represents, from the most critical point of view, the purest idealism.

Cutting off Paris to rebuild it rationally was a difficult utopia to achieve.

Years after this project, already in the 1950s, the Indian government commissioned him to build Chandigarh, the new capital of Punjab.

On this occasion he did have the opportunity to put his ideas and his urban thinking into practice. 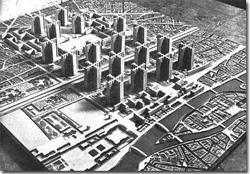 Interestingly, Le Corbusier only once built tall homes for domestic use in France.

It was located some distance from the city center of Marseille, on Boulevard Michelet.

The building has eighteen floors, fifty-five meters high, and surrounded by five hectares of parks. It houses apartments that can accommodate 1,600 people.

It included, among its facilities, a gym, a swimming pool for children and a cycling track.

The passage of time, the pool cracked, the gym was unsuccessfully converted into a disco and the cycling track was abandoned to oblivion.

However, this construction has always been pointed out as the personification of Le Corbusier’s social ideal.

A building to house the lives of its occupants in a healthy way.

Its rooftop, as can be seen in the image above, has been considered one of the «rooftops of the world», a space open to utopia, quite similar to Fourier’s architectural spirit, who in the 19th century established the limits of utopian socialism.