The Roman soldiers were the fundamental piece so that the Roman Empire could expand and dominate the half known world.

That would not have happened if behind the powerful army there had not been some well-disciplined, trained and equipped soldiers to fight in all fields and in all circumstances, knowing how to innovate with war strategies that became more sophisticated with the passing of time.

Thanks to the descriptions of two historians, the Roman Titus Livy and the Greek Polybius, we have data to know what life was like for Roman soldiers.

The Beginning of the Roman Army

The Roman army that was born in the first years of the Republic had nothing to do with the one that was forged in the Imperial splendor.

In those early days, one can speak more of an “inner guard” as some scholars have called it than of a true army, much less of a permanent army. More than anything because there was no need.

Only when danger loomed were men called up, carried their own weapons, and charged a small fee. His service ceased when the danger ended.

It was with the annexation of the first territories in Italy itself that what can be called an army was formed.

Again, social classes mark the differences, in such a way that those who had a high purchasing power swelled the ranks of the cavalry, what could be considered as the upper middle class, in the infantry, and those who had the least possible, went to The marine.

The enlistment period of the Roman Soldier

When this army began to take shape, the period of professional enlistment varied between 16 and 20 years of service.

It was obliged for the Roman soldier to swear obedience, in a solemn way, before the Consul. He did it in front of all the officers and tribunes.

Something that created identity as a group, charging all its members with patriotic responsibility. Part of the greatness of the Empire is forged in gestures like these. 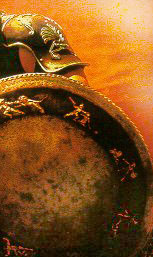 How was the Roman Soldier

The Roman soldier, generally, came from the field. Historians point to him as “a man of small stature, dark complexion, thick and robust complexion.” The work in the fields had hardened him.

The “screening tests” limited access to men whose strength and robustness were not tested, and the board that supervised entry was very severe.

Roman soldiers underwent training similar to what any infantry can do today: 30-kilometer marches, with a load on their backs of 60 Roman pounds, which is equivalent to about twenty kilos.

That weight was divided between the weapons, food and various utensils such as a shovel, an ax, a hoe, all of which would be very useful to them.

The Life of the Roman Soldier

Experienced soldiers mingled with newcomers in the camps. In the lowest stratum were the “Gregarius”, the common soldiers and because, when they fought, they did it like a herd.
The group of eight Roman soldiers who formed a kind of unit was called “Contubernium”.

They lived together in the same tent in the barracks and every day, as soon as they got up, they carried out a kind of military parade.

His life was training. His training was very rigorous. They rehearsed war, practiced with weapons …

Ultimately, they were preparing for the battlefield. His diet was rather austere. Dinner was the main meal and bread, vegetables, soups, and cereal porridge were usually served there.

The Roman soldiers, in addition to preparing the fight and practicing war, collaborated in the development of the colonization of the Empire.

They participated in the occupation of cities, in their foundation, or in the construction of roads, aqueducts or bridges, many of which have reached us.

The Weapons of the Roman Soldiers

Among the weapons that the troops of the Roman Empire had were the catapults, the crossbows, capable of launching stones of twenty kilos up to almost four hundred meters, the Pilum, similar to the javelin, which measured 215 centimeters and the battering rams, that served to break down the doors of the fortresses to invade.

In addition, all the soldiers wore the same uniform, another example of the organization of the army. 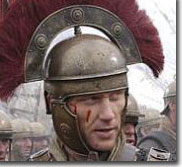 The Praetorian Guard was the Emperor’s personal guard. They were led by the Prefect, a person the emperor’s trustworthy person. They were considered at the top of the military ladder so they charged more and enjoyed a special prestige.

The retreat of the Roman Soldiers

After completing service in the army, the soldiers were discharged and retired. They were called “veterans.”

Under Augusto, these veterans were better regarded and, above all, better paid. The soldiers of the auxiliary forces were granted citizenship, granting them two tables of bronzes where such condition was stated.

Better unemployed came the legionaries, who at the beginning of the Empire were granted lands and, always, an amount of money.

A Legion was made up of around five thousand five hundred soldiers, Roman citizens, who could not marry. This rule was repealed, or at least taken more loosely in the second century. The legionaries had better economic conditions than the rest of the soldiers and, of course, with better training.

Each Legion was divided into what came to be called cohorts made up of four hundred and eighty men. These cohorts were divided, in turn, into six centuries made up of eighty men. And in each century there were ten groups of eight men who received the name of conspiracy. These numerical data changed over time, but as you can guess, and as we will continue to see, organization, hierarchy and order ruled as fundamental principles.

At the command of all of them a Centurion was appointed, the most veteran of them being the head of the first cohort.

Behind them, in rank, were the non-commissioned officers, among whom were the signiferi and the bearers of the banners. Each Legion was numbered with correlative ordinal numbers, and when one was defeated or annihilated, its number was not used again because it was considered dishonored. Legions were generally stationed in “hot zones”, especially near the borders.

Auxiliary Units of the Roman Army

They were recruited from non-citizens and used to come, in this way, from the Provinces. Their mission was to provide the Legions with support. Joining the auxiliary units required soldiers to serve in them for no less than twenty-five years. There were cavalry, infantry or mounted infantry units. They also formed cohorts and each of them could be composed of a thousand men.

The Romans copied the Greek naval model, but never gave it too much importance, perhaps because almost all of its components were foreign. Hence it was used as a secondary force.

In the time of Augustus there were three great naval bases. One in the Bay of Naples, another in the South of France and another in Ravenna, today buried under the sand.

Some time later other bases were created, such as the one that was intended to be used as support for the conquest of Britannia.

Description
The Roman soldiers were the fundamental piece so that the Roman Empire could expand and dominate the half known world.
Author
Lilian M Montesinos

History
Posted on 3 February, 2022
Contents1 Philip II: A long-lived king2 A terrible agony for the king of half the world. Causes of his death3 A “good death” for the...
Go to mobile version