Napoleón: buried in six concentric coffins and mutilated. This is how Napoleon lies, without a penis, among other things, in the Invalids of Paris. Mutilated Parts of your intestine or your teeth passed through auction rooms, or direct and private sales. Napoleon has written many things that are difficult to know how far the legend goes. It is said that the trees surrounding his grave, on Santa Elena Island, were arranged until they were splintered. The people were in the belief that this wood contained the essence of Napoleon. Although it might seem unlikely there was a time in this type of belief, based on superstition they were very popular.

Napoleon, in his comfortable exile from Santa Elena, close to luxury, but without the emperor’s excellence, spent time playing cards.

They say that he cheated, but that he also did it in a somewhat childish way.
It has also been written that in his last years he reviewed maps and remembered strategies, perhaps trying to guess the reason for the defeat.

Perhaps he thought, as many historians have claimed based on the same sources, how much influence in the defeat the severe almorrana attack suffered in Waterloo had.

And Napoleon has studied everything … Apparently he suffered from gynecomastia, a bulge or roundness of the breasts, which he was proud of. His doctors said he was joking, claiming that any woman would be proud of them.

About the amputation of Napoleon’s penis, whose exact reason is unknown. It is known, from the testimony written by doctor Frank Richardson, that the cut penis was inserted into a velvet-covered box and delivered to Napoleon’s chaplain, Angel Paul Vignali.

Vignali died, his heirs sold it to the Maggs brothers, owners of a bookstore in London that were their owners until in 1972, a urologist named John K. Lattimer, paid Christie’s $ 400,000 for the member.

John K. Lattimer, who died in May 2007, and one of the owners of Napoleon’s penis, could also count among his possessions some drawings made by Hitler, American civil war rifles or the collar of the shirt with which Lincoln died Of course, bloody.

Among the extravagances that are told about Napoleon, his mania of twisting the ears of those beside him draws attention.

Canon Escoiquiz tells how in an interview he did it, telling him: “You are made a tunant.”

“It has been said of Napoleon’s excised penis that it looked like a twisted shoelace or a wrinkled eel. It tells the story that despite being recognized as a great lover, he was also recognized for having a small penis”.

The most prominent forgery seems to be the pair of intestine pieces, presumably from Napoleon, and acquired by the Museum of the Royal University of Surgeons of England in 1850.

It was learned that they were false because according to the medical report that organ was healthy, while the alleged relic showed signs of cancer. 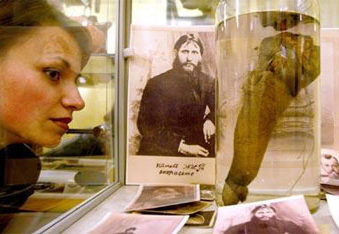 It was also removed. Rasputin’s penis is in the Museum of Eroticism in St. Petersburg.

The museum is located in a urological clinic and the penis, next to a large collection of ceramic phalluses.

They affirm that Rasputin’s penis, about thirty centimeters and immersed in formalin, is intended to be an incentive for patients.