The happening is about involving the public as much as possible in the work of art, making them participate. Furthermore, in the happening music, theater and, also as an expressive element, the visual-plastic intervene. Music, in reality, is usually sounds and noises, while theater is based on monologues or dialogues. The truth is that the happening admits everything, even smells as a form of expression.
In the words of M. McLuham, it is “a sudden situation without arguments”.

At first it was understood that it was based on improvisation, something that was not true since the artist was based on a script that he made available to the public, who also acts as actors, and although certain obvious rules are specified, the The development of the action is part of the will of the participating public.

The performances at the Black Mountain concerts of the musician, thinker and philosopher John Cage, between 1951 and 1925, are considered the historical precedents of Happening. Any place was ideal for the representation of the happening.

At first it seems that open spaces were chosen, outdoors.

However, there are samples of happening in the early days in warehouses or metro stations, to name a few.

Another characteristic of this form of expression was to break with the established, with the static of the traditional theater, hence its representation in theaters or art galleries was difficult. In fact, some of the first happenings took place in unison in different parts of the same city.

However, some of the early happenings were staged in major art galleries, such as the Reben Gallery in New York City.

John Cage is an important figure in contemporary art, not only for his obvious contributions to music but also for his role as a thinker, writer and philosopher, including his contribution to the birth of Happening.

The United States has the honor of being the birthplace of this form of artistic expression. It was the neo-Dadaist works of Jasper Johns and Rauschenberg that stimulated artists such as Rauschenberg, who in October 1959 staged his first happening entitled “18 happenings in 6 parts”.

The happening in Europe

In old Europe the Happening took on a more rebellious tone, if you will, more revolutionary and even aggressive. Inspired by the historical moment, they criticized society and politics. In 1966, several artists signed a document declaring their intention to influence the political-social reality so that individuals would gain consciousness.

The document would be signed by names like Joseph Beuys, Wolf Vostel or Jean-Jacques Lebel, the latter participant in artistic movements such as the permanent Happening of the Latin Quarter in times of May 68.

Another variety of the happening of this early period is the so-called “ritual,” which attempted to recover magical aspects of primitive societies. The representatives of Vienna Actionism, Otto Mühl, Hermann Nitsch, to name a few names, would be the standard bearers of a new formula of.

Some of the videos of this “school” can be found, although we reserve their recommendation because among them we can see a man eating his own vomit or scenes that are difficult to describe, closer to eschatology than to the exhibition of artistic beauty, under our opinion.

Although the terms “performance” and “performance art” were used in the 1970s, the history of performance, especially with regard to the visual arts, dates back to futuristic productions of the 1910s, Dadaism.

Throughout the 20th century, these artistic practices were seen as an untraditional way of making art.

In the postwar period, after World War II, performances were aligned with conceptual art, due to their often immaterial nature.

Now, for a part of artists and critics in the world of visual arts, the term has been used to describe works of art based on films, videos, photographs and installations through which the actions of artists are transmitted. .

More recently, performances have been understood as a way of engaging directly with social reality and identity politics. In 2016, theorist Jonah Westerman argued that ‘a performance is not (and never was) a medium, it is not something that a work of art can be, rather it is a set of questions and concerns about how art relates to people and with the social world in general «.

Iimage by Sol Goldberg on the participants of the happening: «Women licking the jam from a car by Allan Kaprow«. (1964). Image from the Getty Research Institute. © Estate of Sol Goldberg. Tate. 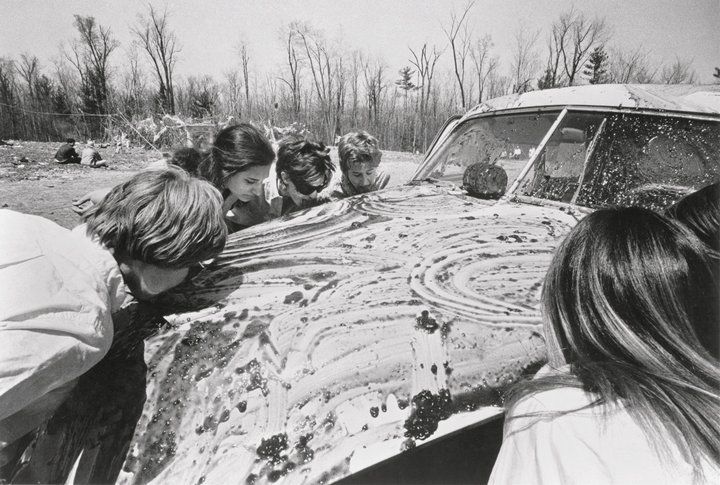 Article Name
Happening as an Artistic Trend
Description
First samples of happening. Definition of artistic HappeningThe happening is about involving the public as much as possible in the work of art, making them participate.
Author
Lilian M Montesinos
Publisher Name
Actually Notes Magazine
Publisher Logo

Art , History
Posted on 20 February, 202022 May, 2021
Contents1 What was Velázquez’s life, beyond his paintings?1.1 Diego Velázquez’s family2 Diego Velázquez arrives in Madrid3 The last years in the life of Diego...
Go to mobile version